It seems that I (Veronica) have stepped away from the blog and Craig has taken over, but that’s just because I’ve been a little burnt out with writing.

See, I write daily at my job and while I love it, I’m not exactly in the mood to continue typing away when I get home. So what could possibly pull me out of my writing rut?

I consider myself an autumn child despite having been born in the summer and living most of my life in the desert. But summer has never been a favorite of mine.

No, it’s fall that makes me come to life. And right now, as I type this it is raining outside. I can see it pouring down outside my window soaking our garden and mini-pumpkin patch.

I’ve written about my love for fall in the past, so I won’t go there now. Instead, I wanted to share a trip I took to Gig Harbor’s Scarecrow Festival. Craig was headed to watch the Mariners game in Seattle with a friend and Tori was working all day so I decided Cat and I needed to get out of the house.

So we headed over the Tacoma Narrows bridge to Sehmel Homestead Park in Gig Harbor. I had never been to the park before so it was an extra special adventure for Cat and I. 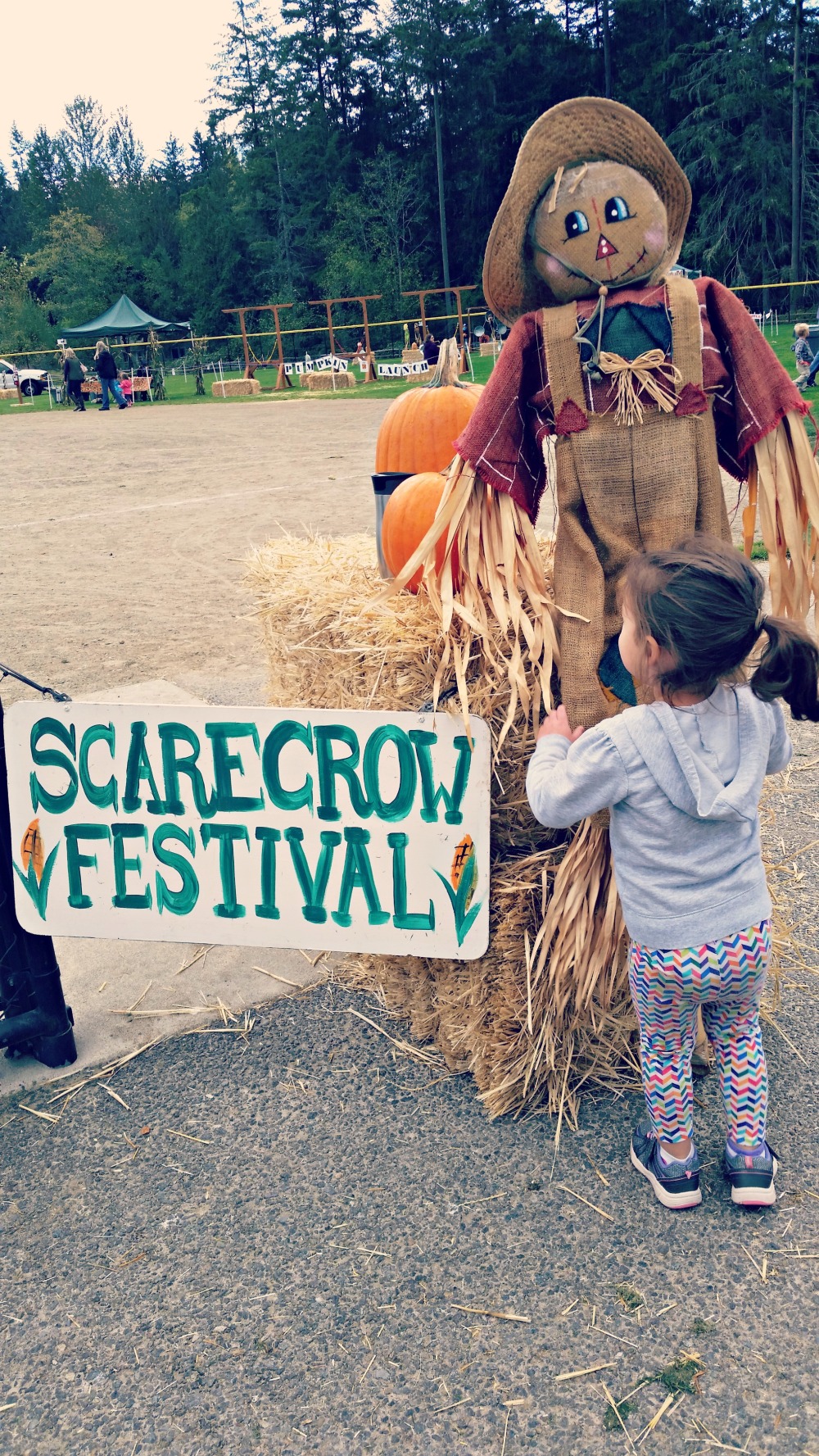 This was the Seventh Annual Scarecrow Festival put on by PenMet Parks. Entry was free with a $2 donation encouraged. Now, I’ve been to some Fall Festivals in my time and I have to say this was one of the best ones I’ve ever attended. There were more than 30 booths featuring local vendors, arts and crafts, businesses, schools, churches, nonprofits and organizations. 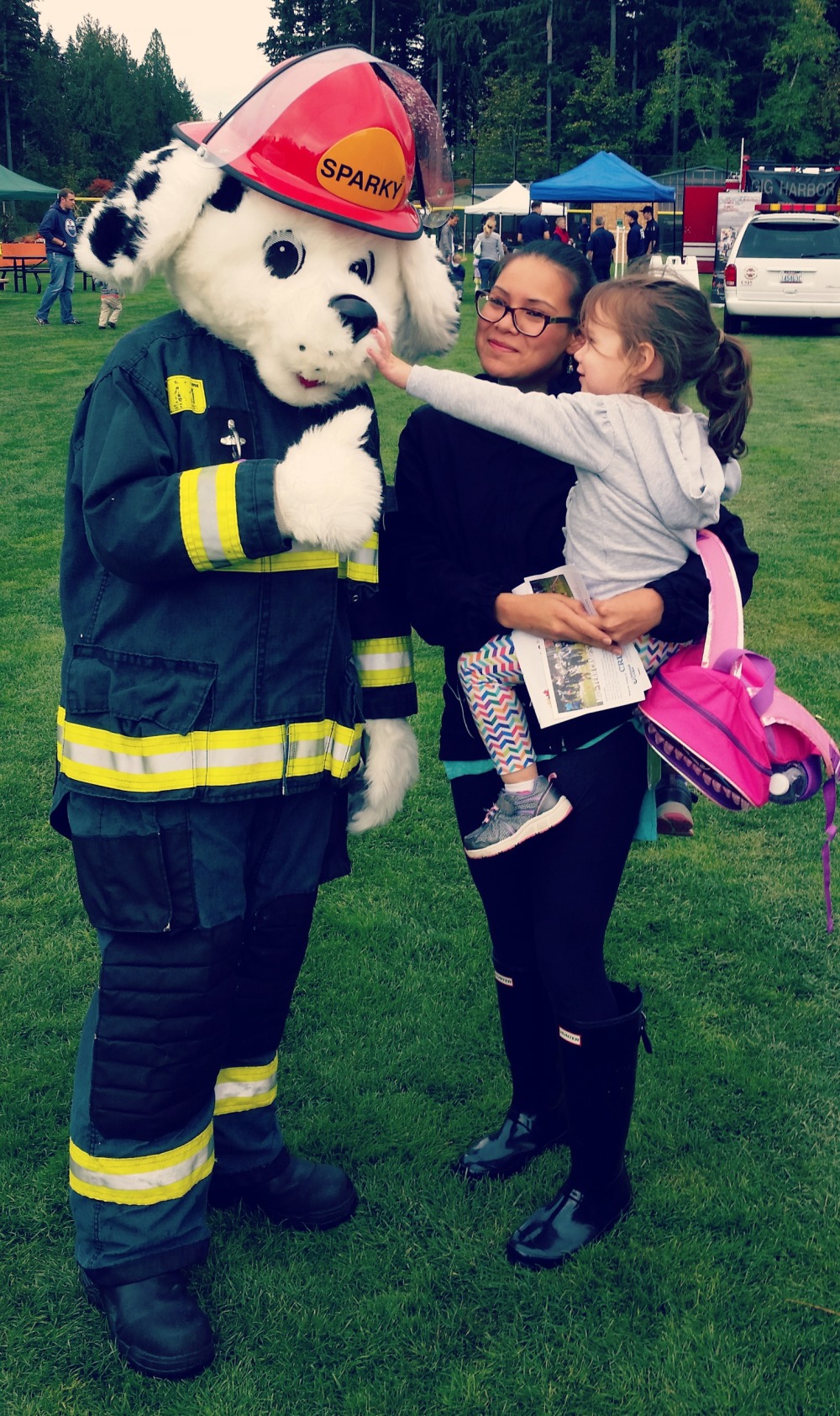 When we arrived we were greeted by Gig Harbor Fire Department’s Sparky the Dog. The Fire Department was there to remind everyone about checking the batteries on smoke alarms. The fall and winter months is peak fire season as people begin using their space heaters, wall heaters, fireplaces and holiday lights.

After giving Sparky a big hug we made our way around the different booths and, as if by some magnetic pull, I found myself walking right up to The Doughnut Dame. A vegan doughnut shop.

I nearly tripped over Cat as I bolted toward the booth to get me … uh, Cat … a chocolate doughnut with sprinkles. Cat and I shared the doughnut while scoping out the park. And there was a lot going on. 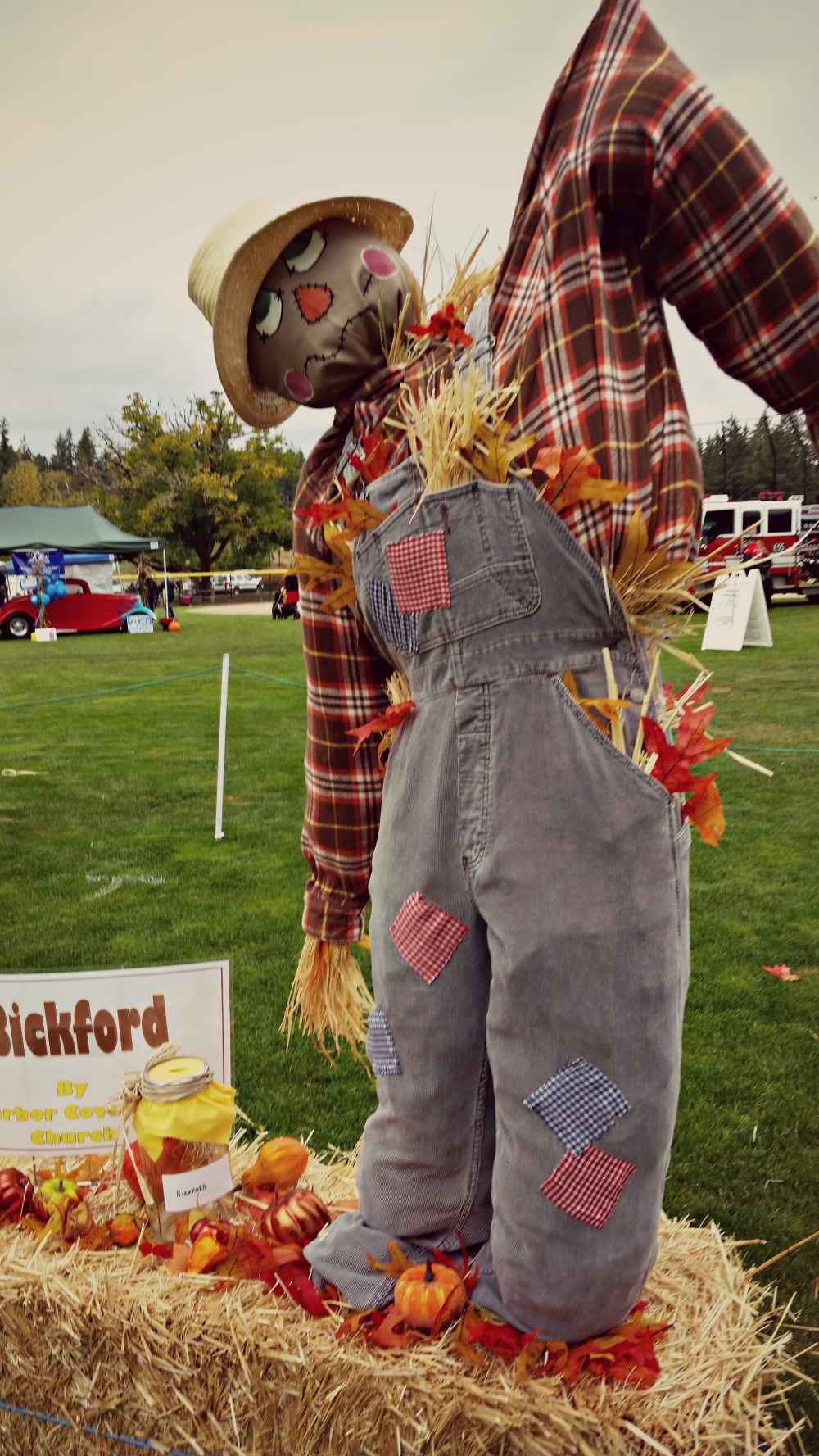 There was the Scarecrow Contest, which of course we did our civic duty of voting. Then Cat played some games and earned stamps so she could win a prize bag. All of the games were free, which was pretty amazing if you ask me. Everyone working the booths were super nice and patient as Cat took  her time throwing a rubber spider at everything but the fake spider webs. She did, however, nail the football game. She made it through the tire on her first  try!

Personally, I’m not a fan of petting zoos. But while checking out the pumpkin launcher Cat caught site of the goats and started yelling “Cow!!” as she trotted toward them. So I let her in to take a peak at the animals. The petting zoo was also free to enter and featured pigmy goats, rabbit, a chicken and pig. 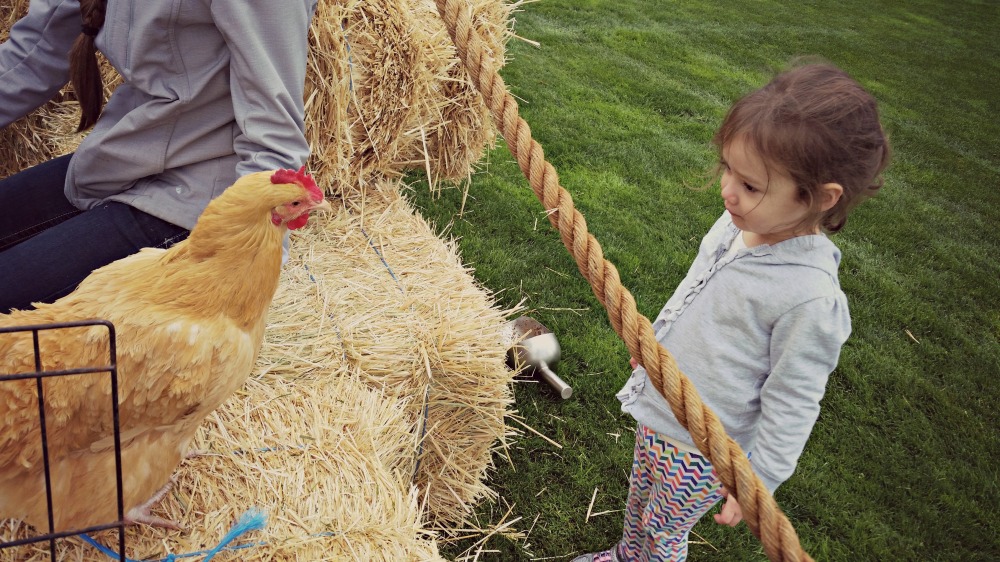 Cat was enthralled by the chicken. I told Cat she could be her friend since we don’t eat chicken. The petting zoo was operated by Miracle Ranch out of Port Orchard. They were also in charge of the hay ride Cat and I hopped onto.

We took a quick spin around the park while munching on kettle corn. Because how can you go to a festival of any kind and not have kettle corn? It’s unAmerican I tell you. 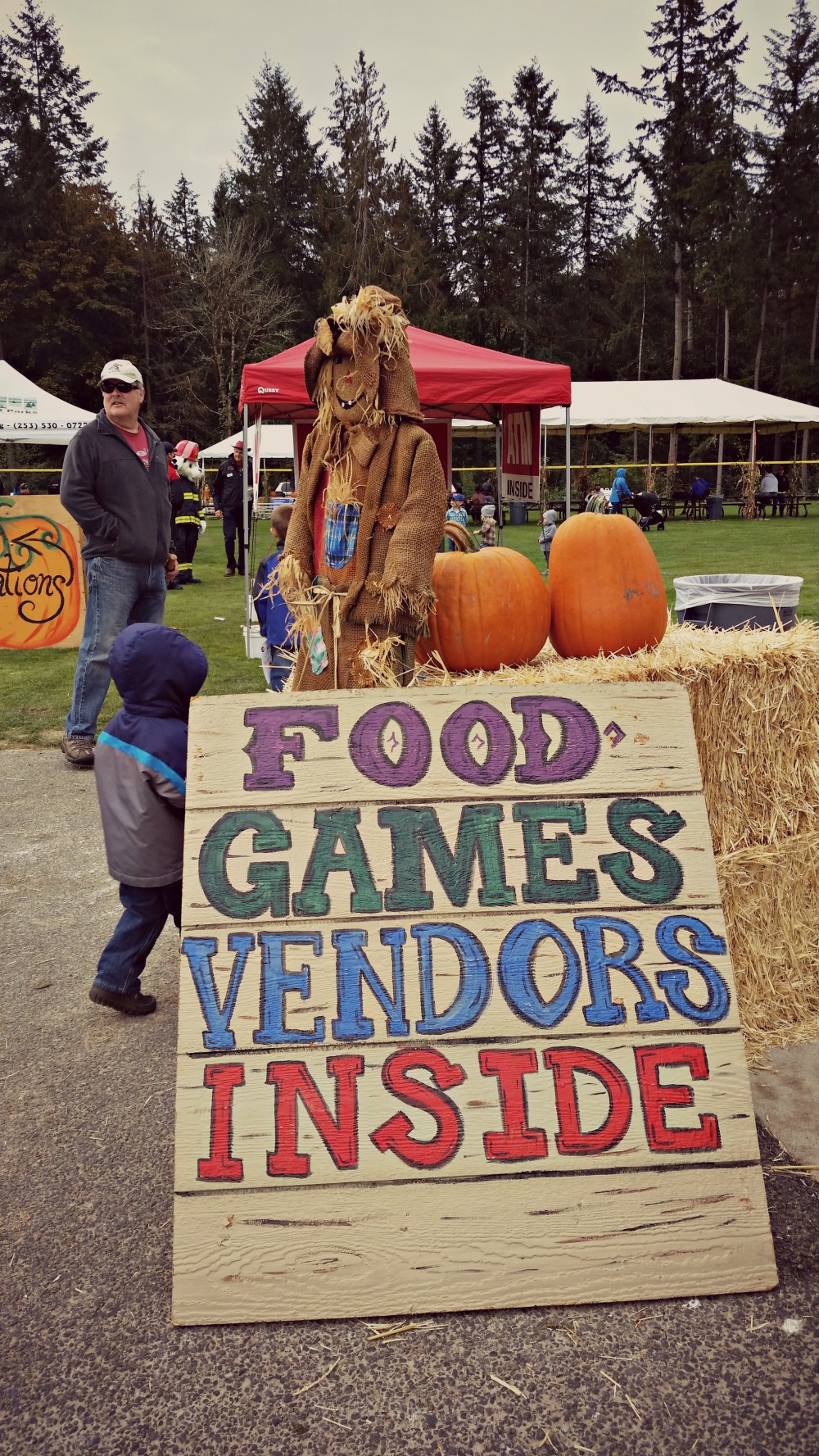 We only stayed  for an hour before heading home so Cat could take a nap. We were only able to do a fraction of the activities offered. There were pony rides, train rides, food vendors, live music and face painting.

But that just give us so much to look forward to next year!